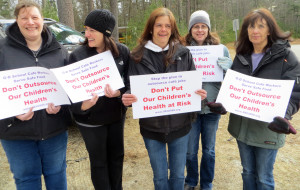 NOT BACKING DOWN: From left, Leslie Colt, Angela Gagne, Jane Cutts, Karen Nardone and Linda Mavilia hold signs April 10 in Groton as part of their successful campaign against outsourcing.[/caption]

The Groton-Dunstable school cafeteria workers, united in Local 888, turned back the school board’s bid to cut costs by outsourcing their jobs. This would have meant slashing their benefits and hours, if not simply replacing them.

“I feel relieved that both sides came to an agreement, and that the cafeteria workers can continue to serve the schoolchildren safe, healthy and tasty food,” said chapter leader Dorynda Auth. “Local 888 staff, other unions and community supporters did a terrific job coming out to support us.”

In addition, she said, “the community as a whole came to recognize us as trained food service providers, not just lunch ladies.”

As the board’s decision loomed, the cafeteria workers and Local 888 staff leafleted the public. This was capped by an

April 10 rally. “I’m pretty angry that, after 15 years of working for the district, my co-workers and I have to fight to keep our jobs and benefits,” said Auth at the time.

After the rally, cafeteria workers and their supporters, including parents and students, packed a meeting where the board discussed the outsourcing plan.

Soon after, the board pursued serious negotiations and both sides agreed on a new contract.

Auth, who gets health insurance through her job, said that the cafeteria staff’s turnover is low – except for those working less than 4 hours a day. They get no benefits.

The Groton-Dunstable Regional School Committee still plans to have Whitsons Culinary Group run the food service operation. But the cafeteria workers get to keep their jobs, benefits and vacation time.

“With community and labor support, the cafeteria workers won a real victory,” said Local 888 President Brenda Rodrigues. “Local 888 was glad to rally other unions and the community to fight along with our members — whose jobs were on the line.”

The two-year contract includes no raise for the first year and an option to re-open salary negotiations for the second year. If a union worker leaves their job, however, the vendor will have the option of replacing the person with a Whitsons employee.

The committee goal was to save a pittance at best — perhaps $70,000 in the first year, $90,000 in the third year of the contract — by eliminating health care benefits for most of the workers. A school district report on outsourcing said that, “benefits constitute a significant net cost for the program.”

Altogether the Groton-Dunstable Regional School District has 2,771 students and goes from elementary grades through high school.

On April 10, community members, cafeteria workers and Local 888 leaders made their views known.

The district’s outsourcing proposal “sends a message that people don’t matter, money does,” said Michael Shea, a parent of Groton schoolchildren and a teacher in nearby Chelmsford.

“I care about the children, and I understand their health issues,” said Karen Nardone, a 10-year Groton-Dunstable cafeteria worker. She talked about making sure a boy who had an allergy to peanuts was served the proper food. “That boy should feel safe when he comes to school; these children deserve quality service,” said Nardone.

“My daughter has severe peanut allergies,” Eric McKenzie, a Groton-Dunstable parent, told the school board. “One safe place for her is the school cafeteria.” McKenzie added that one cafeteria worker actually calls him up to make sure new products will be safe for his daughter.

“The cafeteria workers are our neighbors — they’re part of the community,” McKenzie said.

“I’m really heartbroken that I have to be here tonight,” added Groton-Dunstable parent Valerie Edwards. “We shouldn’t have to be fighting for these women’s jobs.”

Thanks to the outpouring of community and labor support, the cafeteria workers won their fight to keep their jobs.

Is privatization a threat where you work? To get resources and tips on how to fight privatization, email rwilson@seiu888.org.