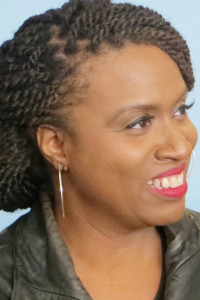 “The work of this union is just so important,” said U.S. Rep. Ayanna Pressley “Yes, it can be tiring to have to organize for basic human rights and dignity — and to have to do it again and again and again. But you have to do it. We can’t afford to be tired and apathetic and cynical.” The new congresswoman spoke at the statewide SEIU “Spring Fling.”

Pressley spoke at the statewide SEIU “Spring Fling,” held in Quincy. Pressley emphasized that her worldview was informed, in part, from working for six years in hotels. She said she learned from her co-workers the economic challenges often faced by blue-collar workers and people of color.

One of her first actions when she took office this January was to co-sponsor legislation that would have provided back pay for the thousands of furloughed federal contract workers who went without a paycheck during the partial government shutdown triggered by the president. “Trump held U.S. families and federal workers hostage,” she added.

Federal workers who went without pay during the shutdown generally collected back pay when the crisis ended. Not so for contract workers — many of them janitors, security personnel and food service workers, she said, adding that these people should get paid, too.

For more about Pressley, see https://pressley.house.gov/media.