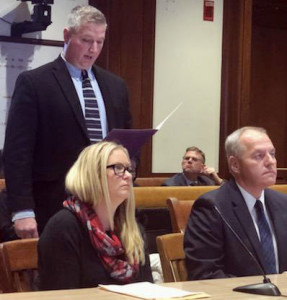 Leaders of the chapter for the Massachusetts 911 dispatchers went to the State House in a bid to get improved pension benefits. They said that the state pension Group 2 language already covers some municipal dispatchers — and should cover state 911 workers as well.

“A dispatcher’s work shift can start with two fatal crashes, an overdose or even an active shooter,” said Local 888 Secretary-Treasurer Tom McKeever, testifying before the Public Safety Committee. “Nothing is routine or the same.”

In part, he said, that’s because dispatchers have taken on more duties that, in the past, were covered by “fire or police signal operators.” State workers with that job title were, by law, put in Group 2, which affords more generous terms for pension benefits.

However, despite their new roles using advanced technology, state dispatchers continue to be classified as Group 1.

“State police dispatchers must react quickly during high-pressure situations,” he added. “Some dispatchers deploy to the field in mobile command centers during major events along the Esplanade, at various parades or festivals or for the Boston Marathon. These conditions add a level of anxiety and stress to employees.”

In addition, McKeever said, “As with law enforcement personnel, the dispatchers provide emergency medical advice, are considered ‘essential personnel’ during storms and public safety emergencies and, as such, are subject to mandatory overtime.”

They must take a basic telecommunications course after getting hired. In addition, they train in various other aspects of the job. “Most dispatchers are certified to provide crucial medical advice on calls,” McKeever said.