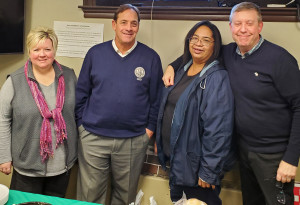 RATIFICATION CELEBRATION! Members of the Chelsea City Hall negotiation team take a break after a successful vote for a new contract. They are, from left: Paulette Velastegui, Richard Zullo, Naomi Libran and Scott Bridges.[/caption]

The recently ratified three-year contract includes cost-of-living increases of 8.5 percent over three years. In addition, there is a 1 percent bump for steps 6 and 7 of the contract.

That means that workers at the top of the pay scale got an additional 2 percent increase on top of the cost-of-living raises.

“More than half of our members got that 2 percent jump right away, along with retro pay,” said Richard Zullo, chapter president and a member of the bargaining committee. “Overall, the members are very happy with it.”

In addition, there were improvements with the new contract, including an increase in the uniform allowance for the animal control officer and the car allowance for inspectors.

“We’ve been fortunate; the city has money,” he added. “It’s not like the bad old days in the 1990s, when the state put Chelsea into receivership.” The chapter, with about 38 members, includes clerks, office managers, inspectors and building and grounds workers.

While he is proud of the new contract, Zullo said that, next time around he’d like to do more for the younger workers who are lower on the pay scale.  “I’d like to fight for the kids who just came on.”