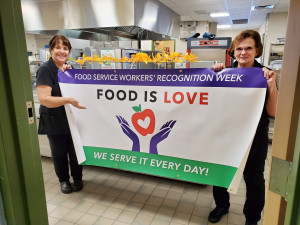 FOOD SERVICE WORKERS HONORED: Pegge Minkle, left, chapter president, and June Iadorola held a “Food Is Love” banner last fall. Both of them served on the negotiating team for the Local 888 cafeteria chapter in Hopkinton.[/caption]

Hopkinton cafeterias’ management came to the bargaining table seeking to eliminate benefits for most Local 888 members. But members stuck together and refused to go along with the plan. Ultimately, they forced management to back down.

It was a difficult process that took almost a year. At one point, “negotiations were almost at impasse,” said Pegge Minkle, chapter president and steward.

But management still wanted to cut benefits. Ultimately, Minkle and the negotiation team called a chapter meeting to listen to what members could accept. “We had a full room,” said Minkle, a cook and kitchen manager.

“The message came in loud and clear: We do not want to lose any benefits at all,” said Minkle. “People really cared about this. After that, everybody came together.”

The negotiation team went back to the bargaining table. “I told management our members were just not going to accept the elimination of benefits,” said Minkle.

Finally, management relented. “We’re very pleased with the contract,” said Minkle. Now, union members will be getting raises, other adjustments in compensation and months of retroactive pay.

Hopkinton, a growing community, has five school buildings with almost 4,000 students. Nonetheless, most Local 888 members are not offered health insurance from the district. The current schedule has 15 of the 25 members working a maximum of 3.95 hours per day, as “general workers.”

Local 888 did a survey that supported cafeteria workers’ demands for more pay and increased respect for the work they do (//www.seiu888.org/cafe/).