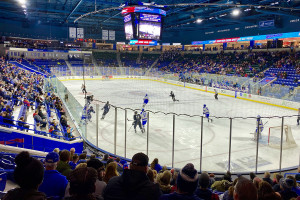 ATHLETICS ON ICE: Local 888 members teamed up for an entertaining Hockey Night last year. Now, the school has canceled athletics for the fall.[/caption]

The Local 888 chapter at UMass Lowell has been protesting the state’s planned layoffs since the summer and working for fairness for its members.

“What’s needed at this point is for the state and federal government to bail us out,” said chapter president Nicholas Piscitello. “They need to recognize that the universities are in financial distress. UMass Lowell is not alone in this. It’s higher education all across the country.”

Locally, the chapter is part of a coalition, UMass Unions United-Lowell, that has organized several protests against the layoffs. That included a July demonstration featuring 200 empty chairs, complete with pink slips attached to them, to represent employees losing their jobs.

“We’re trying to limit the impact on members, where we can,” added Piscitello. “We’re trying to mitigate what we can.” For example, about 10 members took advantage of a retirement incentive program. “Unfortunately, we didn’t have enough people take the incentive to prevent layoffs,” he said.

Now, he said, about 84 members are on “temporary layoff.” Under this designation, the employer portion of their health insurance is covered.

The pandemic shut down the university’s in-person teaching and services in March. Local 888 members played a key role in the huge effort it took to bring classes online.

Subsequently, the university set up a policy under which all staff took at least five days of furlough. Since then, university staffers have been hit with layoffs.

The university has said it took an immediate lockdown loss of $15 million, including such areas as students’ room, board and parking fees. Now, it said, it is facing a $50 million budget shortfall for the current fiscal year.

Under the contract, Local 888 leaders have to be informed in advance of layoffs, which gives some time for bargaining on the issue.

This month, the UMass Lowell chapter plans to take part in protests to cast a spotlight on the need for further funding for higher education.

About 580 members are united in the Local 888 Professional Administrative Chapter.