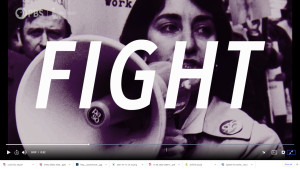 Emerson College’s “Bright Lights Film Series,” co-sponsored by Local 888, is set to launch its 2021 Season — which will feature several union-themed movies aired online. These include “9to5: The Story of a Movement.” The film tells the story of the real-life women who organized for better pay, more advancement opportunities and an end to sexual harassment.

“Bright Lights” is directed by Anna Feder, a Local 888 member and activist. She wrote a front-page opinion piece for DigBoston in early 2018 as the staff fought for a first contract.

The successful union drive at Emerson followed in the footsteps of the organizing work depicted in the movie.

“We build power as workers when we organize,” Feder said. “And as someone who has dealt with gender discrimination at the college, helping to organize the union was how I handled a situation where I felt powerless.”

Feder added that, in the new “Bright Lights” series, she wanted “to focus on economic justice — even as the country and the world continue to grow more economically unjust.”