Local 888 leaders and staff joined other Massachusetts SEIU locals on April 3 for candidate interviews for the offices of Attorney General, State Treasurer and Lieutenant Governor. 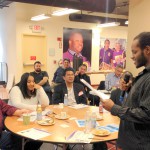 About 50 members attended the interviews which were held at the SEIU Local 32BJ, District 615 union hall in Boston.

Each candidate made an opening statement followed by questions from a member of each local union.  When time permitted additional questions were allowed and the candidates could make a closing statement as well.

"Similar to the Governor's Forum on March 15, this process gave all of us a chance to meet each candidate and hear their positions on the issues that matter most to our members," said Mark DelloRusso, President of SEIU Local 888.  "While we did not make any endorsements, what we learned from these interviews will be a major factor in guiding our endorsement decisions at the SEIU State Council."

The following candidates participated in the interviews:

Members filled out score cards on each candidate after the interviews to guide SEIU State Council decision making on any future SEIU endorsements.