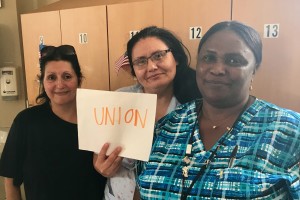 SOLIDARITY: Local 888 members Rosa Matías, Mirna Polanco and Suze St.Val at the Chelsea Soldiers Home show which side they’re on after the Supreme Court’s Janus decision.[/caption]

We must stay united, we must stay strong,” said Local 888 President Brenda Rodrigues after the U.S. Supreme Court ruled against government workers and their unions in the Janus vs AFSCME case. The court reversed a 41-year-old precedent that said all public workers represented by a union could be required to pay “fair share” fees. This ensured that everyone who benefits from union contracts – including wages, benefits and on-the-job protections – has to pay their fair share for their representation.

The new ruling will allow employees to be free riders by refusing to pay their way.

“This Supreme Court decision is yet another example of how billionaires have rigged the system against working people,” said Rodrigues. “But we are not going to allow a court case to stand in our way. Instead, we will redouble our efforts to build unity on the job.”

To begin the fight needed to move forward: