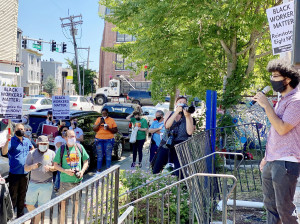 The August vote count for a union-certification election at the nonprofit College Bound Dorchester/Boston Uncornered was held up after management challenged the eligibility of a sizable number of the participants. The National Labor Relations Board (NLRB) is expected to issue a ruling soon.

Votes were cast via mail because of the COVID-19 pandemic.

Balloting was tied, six to six, for the votes allowed by management, which had run an anti-union campaign. The NLRB staff will review the seven votes that were challenged by management, since a ruling affects the outcome of the election. For more on the organizing effort, see //www.seiu888.org/2020/07/16/rallys-call-recognize-the-union-now/