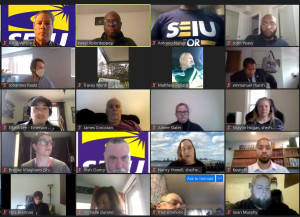 LOCAL 888'S UNCONVENTIONAL CONVENTION: Over 150 members participated in the union's online Zoom event, with its focus on health and safety in the workplace and in the community.[/caption]

Local 888 President Brenda Rodrigues spoke on Zoom at the recent convention about the pandemic and the state of the union. (File photo from 2018 convention.)[/caption]

"During the global pandemic, our union's top priority has been protecting the health of our members and getting them the safety equipment that they need," said Local 888 President Brenda Rodrigues. "Nowhere was this more evident than at the Holyoke Soldiers' Home."

Rodrigues said: "I've never been so proud of our union, our staff and our members as I was during the crisis there. I'm proud of how our leaders stood up for the vets and for their co-workers."

The local's president spoke about Holyoke and the state of the union during the recent Local 888 Convention. Over 150 members participated in the online event.

In contrast to the Holyoke Soldiers' Home, Rodrigues said, "management at most employers has been a good partner — working with our chapter leaders to ensure access to PPE and safe workplaces."

In fact, the two top officials in charge of the Holyoke Soldiers' Home during the COVID-19 outbreak have been indicted on criminal neglect charges related to the deaths of at least 76 veterans.

"It was Local 888 that gathered the evidence of gross mismanagement and first brought it to the attention of the governor," added Rodrigues. Ultimately, the state took a number of measures to stabilize the situation, including bringing in the National Guard (For an in-depth report, see //www.seiu888.org/2020/07/16/weve-been-vindicated/.)

Fittingly for the COVID-19 era, the convention keynote speaker was Carlene Pavlos, executive director of the Massachusetts Public Health Association.

Executive board member and Holyoke Soldiers' Home chapter leader Kwesi Ablordeppey introduced a resolution in support of the legislation that members voted to adopt overwhelmingly.

Jonathan Dudley, chapter member at the Montachusett Opportunity Council, introduced a resolution to "Protect the Vote, Protect the Results." The measure was in support of members taking action should one of the presidential candidates refuse "to concede if the results are clear."

On behalf of the Latino Caucus, Boston Public School's member Jorge Vargas introduced a resolution calling on Local 888 to draw up a "Membership Bill of Health Rights" necessitated by the pandemic.

Executive board member and State Lottery leader Emmanuel Marsh shared a report about the importance of the Local 888 Committee on Political Action — and of having allies at the State House to achieve Local 888's goals. Seven elected leaders and candidates for state office briefly attended the convention to recite a pledge to support Local 888 members and working families.

While much of the convention's work was serious, there was time for levity. Executive board member and town of Harwich chapter leader Carolyn Carey was the MC for rolling out door prizes and calling the names of raffle winners. She also served as parliamentarian.

The new chapter for Local 888 retirees had its public unveiling with a workshop, with its executive board member, Susan Winning, as host.

Conference workshops were geared to Local 888's key industry sectors and job categories, covering: early childhood education, higher ed, school employees, as well as state and municipal workers. There was a separate session for the city of Boston, which has 1,800 Local 888 members covered by 12 contracts.

For a convention slide show and the updated resolutions, see //www.seiu888.org/convention/.